Your dental team is made up of highly qualified, experienced, friendly professionals that care about you and your dental health. Here is some more information about the team: 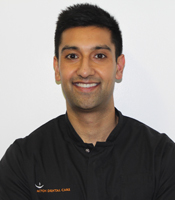 Rajiv grew up in North London, before attending King’s College London, to pursue his career in dentistry. His passion for his vocation means he consistently provides all aspects of complex cosmetic and general dentistry, whilst his caring and gentle nature ensures a comfortable and pleasant treatment experience for all of his patients.

He has continued to further his knowledge and qualifications in the world of dentistry, learning from the foremost dentists across the world, whilst keeping up to date and investing in the newest technological advances, to allow us to provide consistent and quality care.

On top of his dental degree, he has completed a Diploma in Aesthetic restorative dentistry with distinction (again at King’s College) and has completed Certificates in Dental Implants and also in Advanced Gum Treatments. He has a special interest in the field of Periodontology and is a full Invisalign provider. He is also familiar with TMJ Disorders and Splint therapies for such conditions.

Outside of dentistry, Rajiv has a love of wildlife and nature. He has completed the equivalent of the Field Guides of South Africa’s Level 1 Game Ranger training and holds and Advanced Open Water Diving certificate.

When work and his young family allows it, he likes to pursue his hobbies of skiing and travelling or unwind at the gym. 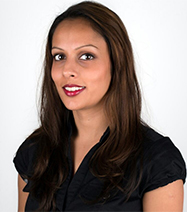 Dr Patel qualified with both her undergraduate Bachelor of Dental Surgery degree and postgraduate Masters in Orthodontics from King’s College London.

After her undergraduate training in dentistry, Dr. Patel undertook further training in Maxillofacial and Oral surgery and Paediatric dentistry before embarking on her Specialist training in Orthodontics at Guy’s Hospital and the Queen Victoria Hospital, East Grinstead. This allowed her to treat both child and adult patients, requiring multidisciplinary care from other specialties. In addition Dr Patel has treated a number of adult patients requiring the diagnosis and treatment of Obstructive Sleep Apnoea.

Since qualifying as a Specialist in Orthodontics, Dr. Patel has flown with her clinical ability in lingual orthodontics and is recognised as a key opinion leader and expert provider in the Incognito lingual brace system- (Hidden braces). In addition she is accredited in both Invisalign and the “Win” and “Forestadent 2D” lingual systems.

Her Masters research has been presented at a Medical World Congress in Maui, Hawaii and published in the European Journal of Orthodontics- She has also been invited to speak both regionally and internationally, in Austria and Italy.

Dr Patel believes that orthodontics is where Art meets Science and out of work she has a keen interest in the History of Art, painting and attending current exhibitions. She enjoys her annual ski trips, playing squash and making the most out of life. 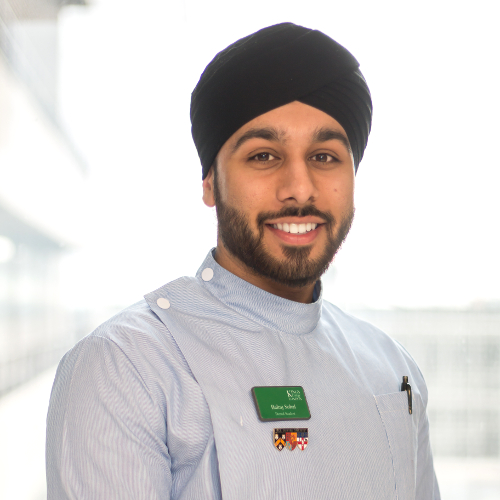 Bal graduated from the prestigious King’s College London Dental
Institute. During his undergraduate days Bal served as the President of
the King’s College London Dental Society where he introduced
numerous new initiatives. His work for the Dental Society caught the eye
of the British Dental Journal in which he was interviewed and featured –
the BDJ is the most widely distributed dental journal in the UK.
Throughout his undergraduate training his work, clinical skills and
commitment to the institution was recognised by numerous clinical and
academic accolades – the Guy’s Full shield, the Richard Dickinson USA
trust fund award, King’s Opportunity Fund, Gold Star Award and most
notably the Jelf Medal – the most prestigious award the dental school
offers. Since graduating Bal won first place in Mini-Smile-Makeover’s
Young Maestro as well as being named as the NSK Rising Star 2019.
He most recently was recognised as the Best Young Dentist London
2020 at both the FMC & Private Dentistry Awards.
After graduating he completed his dental foundation training in the highly
sought-after North-East London Deanery. Bal is still committed to King’s
Dental Institute and has been recognised as an Ambassador for the
dental school. He currently serves on the KCL Dental Alumni Association
committee.
Bal loves treating his patients with the highest level of care and strives to
go that one step further to help them feel more comfortable with their
oral health. He loves aesthetic dentistry and has had his work
showcased in numerous presentations and has presented some of his
work at conferences in the United States. He believes in continuous
development to ensure his patients receive the utmost standard of care
and has completed a 4-day residency in Milan with the respected Style
Italiano Group. He has also completed a post-graduate year-long
programme on comprehensive and cosmetic dentistry under the tutelage
of world-renowned dentist, Chris Orr. 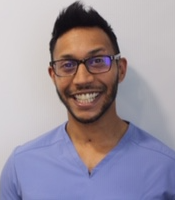 Associate
The University of Manchester

Vishaal graduated from The University of Manchester in 2009. Since graduating he has attended many post-graduate courses. These include Invisalign and C-fast for cosmetic orthodontics, Mini smile Makeover and Smilefast which specialise in composite bonding and veneers. He has also completed a year and a half long course in Dental Implants run by the PID academy.
However, Vishaal’s true passion lies in restorative dentistry. He is now in his last year of a course run by the Tipton Academy. This last year focusses mainly on aesthetic dentistry.
Aside from the formal qualifications, Vishal strives to make patients feel at ease and comfortable attending appointments. He finds great joy in helping patients transition from feeling anxious to enjoying visiting the dentist!
Outside of dentistry Vishaal enjoys playing golf and badminton and generally exploring new places around the UK. 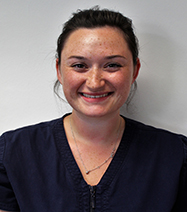 Kelsey qualified with an FdSc in Oral Health Sciences from the University of Essex in 2013, allowing her to practice as a fully qualified dental hygienist.

She thoroughly enjoys all aspects of my profession, specifically chatting with patients and helping them reach their health, as well as aesthetic goals. She particularly enjoys helping nervous patients feel more comfortable and at ease in the dental environment. She loves giving patient’s confidence, and helping them along the way to a lovely, healthy smile.

In her spare time she loves reading – especially classical books – and baking. 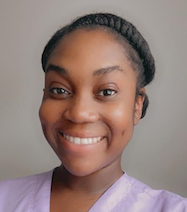 Aisosa gained her dual qualification in Dental Hygiene and Therapy from King’s College London Hospital and has 6 years’ experience in dentistry.

Prior to graduating as a Dental Therapist, she qualified as a dental assistant at Eastman Dental Hospital UCLH and obtained a Bachelor of Science from the University of Hertfordshire.

Aisosa is enthusiastic about promoting oral health and more importantly its link to our general health. As a Dental Therapist she can provide restorative filling treatments for adults and children as well as cosmetic procedures. She works to a high standard and provides bespoke, thorough patient education for the most effective home hygiene habits.

She has a kind natured and thorough approach to care with her patients and enjoys helping to transform the condition of teeth and gums to healthy. She believes everyone should have their teeth for life.

In her spare time she enjoys spending time with family and friends, designing and keeping an active and healthy lifestyle. 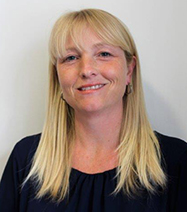 Tracy has been working at Hacton Dental Care for just over a year. She can often be found on the reception desk but also spends 2 days per week in the office organising all of the practice administration.

Any time she is not at work, Tracy can often be found watching her son’s playing football or cricket. She also enjoys eating out and socialising with friends. 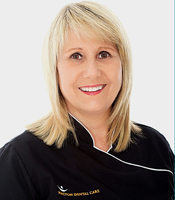 Lorraine Wilson, the longest serving and a key member of our team, has been a dental nurse for over 30 years. She brings invaluable experience to the team and has a passion for Dentistry.

Lorraine has a kind and caring demeanor and is always looking to help put our patients at ease. Over the years, she has attended many courses to further her skills and knowledge. In particular, she loves working on smile make-overs as the transformations they bring out in the patient, are wonderful to see.

In her spare time, she likes taking long walks with her dog , staying fit and looking after/spoiling her grandchildren. 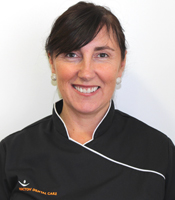 Lisa has been an integral part of our team for the last 8 years, but a dental nurse for over 20 years. Lisa loves working as a Dental nurse and is always keen to learn and better herself. She has attended many dental courses over her career and always applies what she has learnt, in her work.

She has 3 young daughters who keep her busy when she is not working. She enjoys visits to the theatre, attending concerts and holidays with her family. 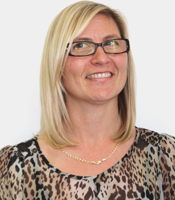 Stacey has been a receptionist at Hacton Dental Care for 5 years and is the first point of contact when you attend our practice. She has a caring and helpful demeanour and always endeavours to do whatever she can to make your visit comfortable and enjoyable.

spare time is usually spent supporting and watching her son, partake in his various sporting activities.

WE ARE PROUD TO BE MEMBERS OF: